Last week, I got free Patron tickets to the Avril Lavigne Black Star Tour in Manila from FlyPal. Avril Lavigne was the anthem of my youth. I remember belting out the songs “Complicated,” “Sk8r Boy,” and “I’m With You” with all my heart and soul. I was an angsty and angry youth and her songs resonated with the emotions I was feeling then. Hence, this concert was in a way a re-living of my teenage years.

Needless to say, most of the people who attended were teenagers. I felt a bit out of place but oh well, I just gotta have fun! 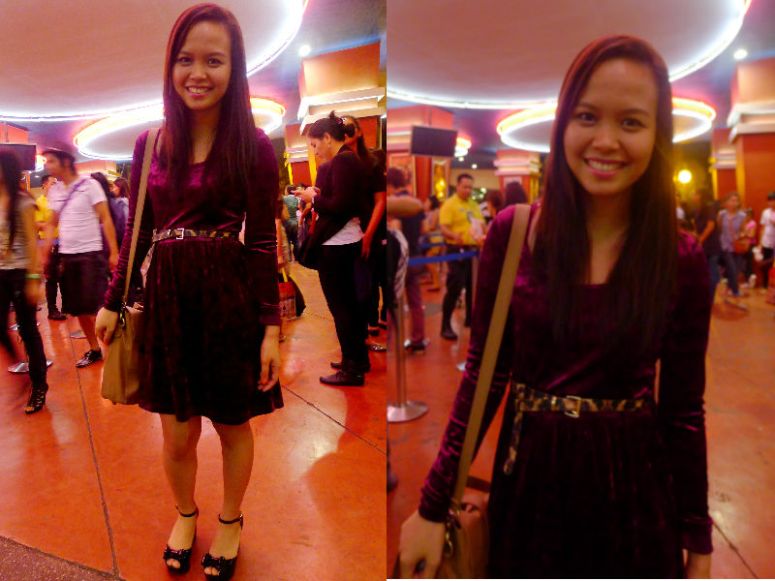 It being a rainy day, I put on this velvet dress from Forever 21. It’s the perfect outfit to keep warm and cozy. I paired it with the leopard print belt to break the monotony and my favorite shoes of the moment. I was also carrying my White Calf satchel bag because I just came from work.

I do not have much photos because my Lumix LX5’s zoom was not powerful enough but my friend’s camera was awesome and she took plenty of videos of Avril singing. The last photo is a screen grab from one of the videos. She looked really awesome in her usual punk rock way and I could tell that she really loved the crowd. The crowd that night had so much energy, cheering her on and singing along with most of her songs. I guess she thought that we all sang well because at some point during the song “I’m With You,” she made as repeat the chorus THREE times! Hahaha

I could also tell that the crowd singing along gave her a lot of time to rest her voice during the concert. She’d often ask the crowd to sing some parts of her songs with obvious delight. I wonder if crowds in other countries give as warm a reception as we give to the artists who come here.

Surprisingly, her voice sounded all right live. I know some artists who are terrible live but she was actually decent. There were times when she had to lower the notes to some of her songs but most of time, she was bang on. 🙂 Manila being the second to the last stop to her tour impacts the quality of her voice, I guess. I would be so tired to sing too if it were me.

My  favorite part was when she stepped off the stage and everyone started stomping their feet screaming “We want more!” She came back and everyone went wild, especially because she sang one of her most popular singles, “Complicated.”

To end this post, I’m sharing two videos from my friend to you guys of my favorite songs. First one is “When You’re Gone”:

The second is one of my all-time favorite song of hers. It’s emo and angsty just the way I was before:

Overall, I really enjoyed her concert. To be honest, it was the first concert I ever attended because I’m not really a concert-goer but this one was such a lovely experience that I’m willing to book tickets to watch some more. 🙂